Estate with a view on the Fort 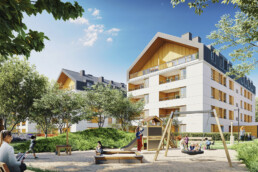 At Kopalniana Street in Warsaw’s Bemowo district, construction of a modern housing estate Fantazja of our project is beginning. The developer of the project is Cordia Polska, a member of the international Cordia Capital Group, which carries out numerous housing projects in Warsaw, Krakow and the Tri-City.

The estate is located in the close neighborhood of the historic Fort Chrzanów.

The Fantazja complex, located in the vicinity of the planned Połczyńska subway station, will comprise 5 modern residential buildings with a style reminiscent of the minimalistic Scandinavian esthetic. 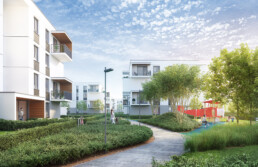 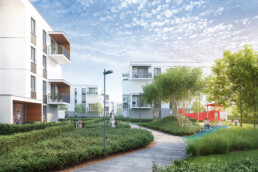 Coopera Estate is an investment in the northern part of Chrzanów, in Bemowo district, carried out by the Unidevelopment company from UNIBEP group.

In this exceptionally attractive area, we designed a complex of 15 modern, functional buildings, which consists of as many as 400 flats. Light, bright blocks with characteristic balconies perfectly fit into the green surroundings of the estate, which is under the patronage of the American aviator – Merian Caldwell Cooper.

Two stages of the investment have already been commissioned. Three more buildings are currently under construction. 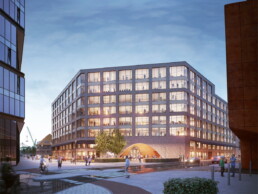 Multifunctional complex on the premises of Gdansk Shipyard with building permit 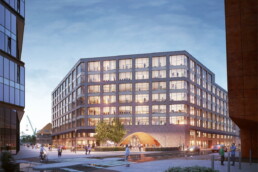 Our studio is currently working on a prestigious multifunctional project by the Finnish developer YIT in Gdańsk.

In the area of Gdansk Shipyard and historical Young Town, in the vicinity of the European Solidarity Centre, a multifunctional complex inspired by the industrial heritage of Gdansk Shipyard will be built. The building was designed in cooperation with Professor Rainer Mahlamäki, co-founder of one of the most recognizable Finnish architectural studios – Lahdelma&Mahlamäki Architects. The studio is known in Poland, among other things, for its award-winning design of the POLIN Museum of the History of Polish Jews in Warsaw.

Latergrupa Architekci in cooperation with GCK Architekci has the pleasure of co-creating a project in Gdańsk, the total usable area of which is over 40 500 m2. The complex will consist of 243 apartments, 156 micro-apartments and an office building offering 23 000 m2 of rentable area. The project is distinguished by the dynamics of the bodies of individual buildings, referring to the historical and multicultural character of the place. The project’s assumption is an open character and a lively multifunctional place for work, living and leisure. The historical view axes and the communication system connecting the shipyard, the European Solidarity Centre and the Old Town have been preserved.

Construction is scheduled to start in the second half of this year. 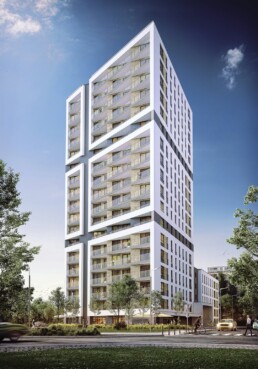 Another construction project is nearing completion. Horyzont Praga - a  high-rise building, which we designed for Cordia Polska, can now be admired in all its glory.

The building, with its characteristic mass divided into two parts – 4 and 17-storeys – stands within the boundaries of the Praga Południe district on Rodziewiczówny Street.

Its 18 storeys will house 164 apartments with a magnificent view of the Warsaw panorama.

The construction of Horyzont Praga began in August 2019 and will be completed in the summer of 2021. 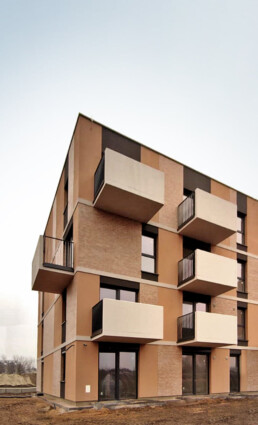 We are pleased to announce that the estate at Ostródzka street in Warsaw's Białołęka district of our project is almost complete.

Within the first stage of the Apartamenty Ostródzka project, carried out by the ATAL Group, we designed four three-storey buildings comprising 123 apartments and a commercial unit.  The estate is designed for families and singles who want to live in Warsaw, but away from the hustle and bustle of the city. Regardless of the layout, each apartment comes with a private garden or balcony.

Revitalization of the area of the former factory "PERUN"

We have great news for you!

We have presented the design concept for the area of the former Warsaw Welding Equipment Factory “PERUN”. We hope that the area with a great potential at Grochowska street in Praga Południe district will soon change a lot, and the historic buildings will regain their former glory. 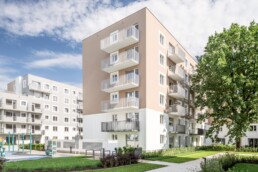 Estate with a hundred-year-old oak tree

In the district of Białołęka, at Marywilska Street construction of the "Kameralne" housing estate has been completed.

In the heart of one of the courtyards stands a hundred-year-old oak. The investor is Unidevelopment group. 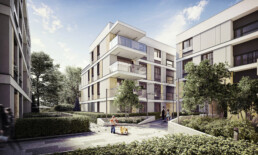 The estate with a view on Park Szczęśliwicki

In the Warsaw district of Ochota we have completed 4 buildings of our design.

Large balconies and an intimate courtyard are characteristic elements of this estate overlooking the park.